Interview on October 6th, 2013
1. Where are you working at this moment?
I’m working as a Full Professor of Ethics of Care at the University of Groningen and the University Medical Centre Groningen in the Netherlands.

2. Can you tell us about your research and its relation to the ethics of care?
For the last two decades I have done several research projects on ethics of care. I would like to mention two projects here as these are the most recent ones and are still very important for me.

The first one is the idea of care ethics as a form of naturalized bioethics. In 2008 Margaret Walker, Hilde Lindemann and I edited the anthology Naturalized Bioethics, Toward Responsible Knowing and Practice. We defined naturalized ethics as an approach that conceives of morality as a living thing, a continual interpersonal process of holding ourselves and others to account for what we value, negotiating responsibilities, making ourselves morally intelligible, and constructing and reconstructing our moral views of how best to go on together (Lindemann et al., 2008). Naturalism in ethics moves toward an ethics that is empirically nourished but also acutely aware that morality is the practice of particular people in particular times, places, cultures and professional environments. Care ethics is a practice-based ethics in the sense that it describes, analyses and evaluates existing practices of care. In being a practice-based ethics, it can also be recognized as a so-called naturalized ethics.

The second is the development of a so-called family ethics. In 2010 I started the idea to develop a family ethics with some international research friends. Our starting point is that an increasing number of areas of biomedicine require a more relational perspective to understand how people’s sense of moral responsibility and identity comes to be. Such a perspective needs to be sensitive to broader socio-cultural understandings of health and well-being, and quality of life. We believe that it is important to examine how responsibilities are conceptualized and lived, in order to think about how best to theorize their significance and to ethically intervene. As the Ethics of Family in Health and Social Care Research Consortium we aim to develop new theoretical approaches that can address the contemporary challenges to responsibility created by new areas of healthcare practice and intervention. In particular we are interested in the significance of people’s key relationships, such as family and community,  and in how they deliberate and make decisions about responsibilities they must respond to.

3. How did you get involved in the ethics of care?
In 1993 Henk Manschot (Professor Philosophy and the University of Humanistic Studies) and I started with the idea to write a critical piece on mainstream medical ethics. We were critical about the dominance of individual autonomy and self-sufficiency. We thought that there should be recognition of the idea that human existence characterizes itself by vulnerability and interdependency. At that same time we met Selma Sevenhuijsen and Joan Tronto who were working on similar themes. When Joan Tronto published Moral Boundaries, we started a very fruitful collaboration for almost a decade. Manschot and I published the first Dutch anthology on care ethics: Ethiek van de Zorg, een discussie (Boom, 1994). We also started a network on Care ethics and we have organized with Joan and Selma several post-graduate courses on Care Ethics. The picture of Joan, Selma, Henk, Douwe van Houten and me goes back to 1996, when Joan presented a public lecture at the University of Humanistic Studies. 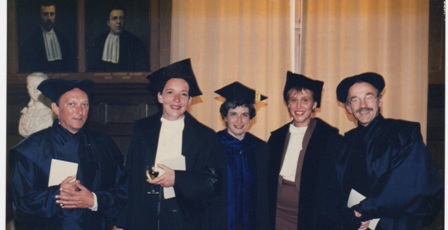 In 1995 I was appointed as Professor of Ethics of Care (Socrates chair first, later as Full Professor in 2000).

4. How would you define ethics of care?
I would define care as a practice as well as a value. In defining care as a practice, the idea of care as a specific activity is emphasized. Care is, as Virginia Held would state, a form of relational labor (Held, 2004). It is a ‘species activity that includes everything that we do to maintain, continue and repair “our world” so that we can live in it as well as possible’ (Tronto,1993). In care as a practice we take care for each other and respond to the three key facts of human existence: dependency, vulnerability and interdependency (Walker, 2006). The first key fact refers to the ‘inevitable feature of the human cycle of life. During our life we experience phases of dependency: we all begin in radical and fragile dependency, and all who grow old enough are very likely to return to it as an ongoing way of living’. The second key fact is the unavoidable vulnerability of our human bodies.  And finally, the third key fact points toward the interdependency as an ineliminable feature of human social existence. Care as a practice is the answer to these three key facts of human existence, so to say.  In that respect care is a fundamental aspect of human life. Caring can take different forms such as mothering, friendship, nursing and citizenship. These different practices all express significant ways in which we matter to each other.

Care is not only a form of relational work or activity, but also a value. Practices of care incorporate certain values. For instance, care as an ethical concept gives expression to the values of (1) responsiveness to human needs (2) responsibility and competence in care giving (3) the value of connectedness and (4) the value of care giving (Walker, 2006). Actual practices of care not only incorporate certain values, but also need to be evaluated by these same normative standards these values provide (Held, 2004). As Held states, ‘for actual practices of care we need care, as a value to pick out the appropriate cluster of moral considerations, such as sensitivity, trust and mutual concern, with which to evaluate such practices. Therefore, we also need an ethics of care.

An ethics of care tries to understand, to evaluate and to guide the relatedness of human beings, built and rebuilt. It evaluates practices of care and recommends what they morally ought to be like. In doing so, it proposes a specific form of moral deliberation.

5. What is the most important thing you learned from the ethics of care?
There are several important things, but the most important one is to realize that the moral practice of care is always at the same time a political practice of care. As Joan Tronto has put it: ‘Care is a complex process that ultimately reflects structures of power, economic order, the separation of public and private life and our notions of autonomy and equality.’ (Tronto, 1995). We often forget that care is a gendered and powered practice.

6. Whom do you consider to be your most important teacher(s) in this area?
I could not have done what I do nowadays without the work of Margaret Walker. I consider her as one of the best philosophers today.

7. What works in the ethics of care do you see as the most important?
Moral Boundaries of Joan Tronto is a classic of course. I think that Virginia Held wrote a very good book on Care Ethics. And again Margaret Walker and her book on Moral Understandings.

8. Which of your own books/articles should we read?

9. What are important issues for the ethics of care in the future?
Examining the philosophical and moral implications of the changing nature of responsibilities to care. With the Consortium on Family Ethics we are aiming at just that.

10. In Utrecht our ambition is to promote ethics of care nationally and internationally. Do you have any recommendations or wishes?
Continue the good work.

This site uses Akismet to reduce spam. Learn how your comment data is processed.